During this term, I have read “The emperor’s new clothes”. The illustrator is Valeria Gallo and the publisher is Edelvives. It was published in Zaragoza and it has 18 pages.

The main character is the emperor.

The book is about an emperor who wants to have new clothes.

One day, two tailors came to the palace.  They supposed to sew the emperor’s new clothes but they didn’t sew anything.

While, they were with the Emperor, they said to him: “If you don’t see the clothes is because you are silly”

I like this book because it is very funny.  The kind of book is an illustrated book. The book is easy. The other title of the story: “The naked emperor!”

I recommend this book to Mario because it is funny. 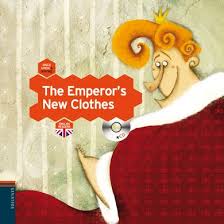