My name is Josafat Rodríguez Colado and I was born in December 12th 2008. I live in Paterna and I study in Gençana School.

I have a sister, her name is Jimena. She is 13 years old, and she also studies in Gençana. Jimena knows how to ride a horse.

My father is called Josafat, and he works in the BBVA that is a bank. He sometimes plays with me at football, ping-pong, table games, and at the FIFA 18 in the PS4.He was born in Madrid.

My mother is called Gema and is distributor of comics. She is very funny. She was also born in Madrid.

My favorite sport is football but when I was very little with 3, 4, 5 years I played tennis too.

My favorite trip is when I went to New York with my mother, my sister and her friend. There I visited the World Trade Center, the Rockefeller Plaza, the New York Bridge, the zero point, the Liberty Statue etc…

In the future I imagine myself as a football player.

I´ll go to Hawaii or the Caribbean Islands. 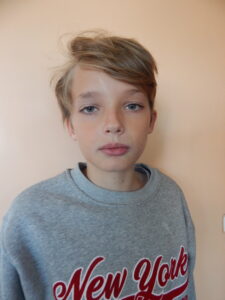