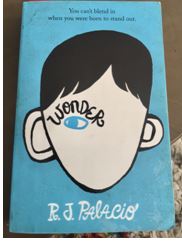 The book I have read over the last few weeks is ‘Wonder’ by R.J Palacio, the publisher is ‘Corgi’ and it has 315 pages.

The book is about a young boy named August, or as his parents call him ‘Auggy’. He has a condition, which his parents refer to as ‘Small anomalies’, in which his face is deformed, but his sister Via does not like putting it that way. He has been home-schooled all his life, until his family finally decides to send him to a ‘normal’ school, but when he arrives there, many of the other children are horrified by his face.

R.J Palacio was born on July 13 1963 and now lives in Brooklyn, her debut novel, Wonder, has been on the New York Times bestseller list since March, 2012

The genre of the book is literature and fiction, and the morals of the book are kindness, friendship, courage and self-acceptance.

-August who is the main character

-Jack and Summer: Both August’s friends

-Dad: Wants the best for August

There is a movie based on this film directed by Stephen Chbosky, which is very good but I suggest you read the book first!

I recommend this book because its great for all ages and it will make you want to laugh and cry. It also sends out a good message about kindness.

I recommend this book to Ariana and Vera P, because I think it’s great for your English and I think you would really enjoy it.